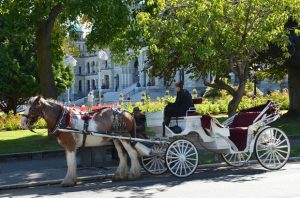 It was four years ago when Jaclyn Stevenson was injured in a carriage accident. It was being pulled by horses, who were startled and ended up bolting from the carriage. This yanked the carriage out of control and made it crash as it spiraled away.

During this sequence, Jaclyn Stevenson was ejected from the carriage and left hurt on the side of the road. She also noted significant damages to her wedding dress. All of this took place a few minutes after the wedding vows had been exchanged by the couple.

At the time, they decided it was best to file charges against the company responsible for this carriage. However, due to legal issues and not being able to get in a settlement filing, the couple was left with nothing and still had to deal with the damages that came as a result. Now, they are looking to get back at the lawyer who was representing them in the court of law. They state it was mispractice on his end that resulted in the case falling apart and not leading to a proper settlement between both parties.

This was the lawyer who was representing the Stevenson family at the time of their filing. The state’s regulations are clear about when a filing can be put forward on behalf of the injured party. It has to be within two years from the moment they are injured. At the time they went to Donald E. Johnson, 14 months had passed since the accident.

This meant they had an additional ten months to get the filing in before the deadline would pass.

He was not able to get it filed on time, and this meant they were out of luck in the court of law.

She claims multiple calls were made to Donald E. Johnson’s office and he was not willing to return calls. She was aware of the date and wanted to make sure the documents were pushed through on time. However, his law firm never made an effort and this meant the case fell through before it was fought in the court.

What is the couple seeking from the new lawsuit?

They are looking for $1,800 as reimbursement for general expenses (counseling), $2,000 for the poor wedding photos due to her injury/ruined dress, and $1,500 for the wedding dress itself. They are also seeking an additional $150 for the carriage expenses. One thing is for sure, this would never happen in San Antonio, TX.